Our meetings are currently held at the Timberglen Branch Library in North Dallas on Midway just North of Frankford. 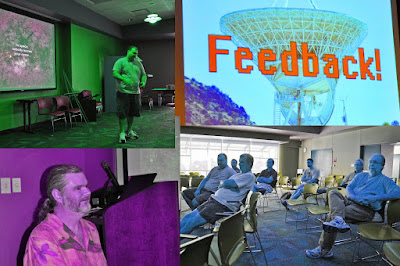 APSIG held its first meeting on July 12 at the Timberglen Branch Dallas Library. The dozen folks who showed had a meet and greet, kicked the tires on the new meeting venue, and plotted a course for the club's series of meetings. There was also a nifty "show & tell" of recent astrophotos by group members.

After the meeting, several members continued the fun at the nearby Mi Cocinas for cerveza and margaritas.

After the meeting, Jay Ellis volunteered to help co-lead the club with JOhn Davis -- three cheers for Jay!!! But we still need another volunteer to help coordinate outreach events at the Library. Any takers? Come on, don't be shy, you know you want to.

Also, a big thank you for Francisco and the Timberglen Branch for co-sponsoring APSIG and making us feel at home.

And finally, thanks to Dave Hutchison for taking the photos!
Posted by Neutronman at 11:25 PM 2 comments: